It seems that every week or so we get questions about using black lights to authenticate vintage crystal, especially Lalique and Sabino. While there is some information out there, it appears that much of it is conflicting. The first thing that needs to be addressed is how black lights work.

Black lights are more formally called ultraviolet lights, or UV for short. Anything from 10nm to 380nm is considered to in the ultraviolet range. Shorter wavelengths are visible light, and longer ones are X-rays. Bees and many other insects can actually see ultraviolet light, but we can't. You may think you have seen some, but that is not strictly true. Ultraviolet light is very energetic, and when it strikes different materials it can cause them to fluoresce. What you see is visible light being generated by the material, not the ultraviolet light that triggers it. Some elements will fluoresce strongly in ultraviolet light, some a little, and some not at all. To make it even more complicated, some elements will only fluoresce in certain wavelengths, and not at all in others. The good news is, that if an element fluoresces, it will always fluoresce the same color.  How does this help us make determinations about crystal? Read on.


In our first image we have (from left to right) A Lalique crystal "St. Marc" vase from around 1990, a Sabino " Les Abeilles" vase from the 1920's, and a Rene Lalique "St. Marc" vase from 1945. We need to note that the 1945 Lalique vase has some opalescence applied whereas the 1990 vase does not, but that is immaterial to the test. It just makes the 1990 vase look much clearer in the first image. Now lets see what happens when we hit them with some 254nm UV light.


As you can see in the image above, they all fluoresce about the same. In real life, the color is quite a bit more purple due to the refraction of the light, but the actual light emitted is really closer to a white. This is because of the lead in the glass. Lead shines white easily in the 254nm UV light. The Lalique vase on the left has 24% lead, and the Lalique vase on the right has only 12%, but no real difference can be seen. Plain unleaded glass will not fluoresce at all, so we know for certain each of the three pieces is indeed leaded crystal and not just a cheap glass reproduction. Good to know, but not enough information. Lets step it up a bit.


Switching to a longer wavelength UV light (365nm) tells a whole different story. The newer Lalique vase on the left still fluoresces a bit, because the lead in it is the only thing that actually CAN fluoresce.  But the Sabino vase does an odd trick... it starts to shine with a bit of an orange hue.  You will find this to be true of every authentic Sabino crystal piece from the 1920's and 1930's. Sabino had his own formula for crystal, and it included Arsenic. It is the Arsenic that gives off the orange tinge to authentic Sabino crystal under 365nm UV light, and it is very distinctive. But take a look at the pre-1946 Rene Lalique vase on the right. It glows with a brilliant green! This is attributed to Manganese in the crystal, used before 1946.  So, in this case 365nm UV light can be very helpful.

But we must keep in mind that there are other things to consider. Older pressed glass often used Uranium Oxide, which will also fluoresce green in 365nm UV light. Some unscrupulous individuals will mark them Lalique and try to fool people, so you need to know if the shape is a Lalique shape before declaring it as a Rene Lalique piece not just because it fluoresces green.

Additionally, whatever UV light you choose will have a large effect on your results. Most inexpensive UV lights are more of a broader band, and the results are more mixed. The 254nm we used is considered to be medium wave UV, or UVB. The 365nm is considered as long wave, or UVA. Both are dangerous and caution should be taken to ensure no one looks at an active bulb. This can result in permanent damage to vision. Also, both can cause burns to exposed skin at higher wattages. Never point them at exposed skin.

Once you have found the UV light that suits your needs, have fun finding the previously unseen information about your crystal. You never know what you might learn!

Posted by The Kings Fortune at 12:53 PM No comments: 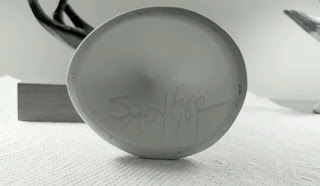 Recently an odd vase caught my eye on ebay. It was listed as "Saoyger", and I have to admit that with all of our experience in the vintage and antique art pottery business, neither of us had ever heard of it. Although we often purchase on ebay for resale, this particular piece I wanted to add to the decor to match our new kitchen remodel. But being ever curious, I set about trying to learn the origin of this distinctively modern-looking piece.

It turns out that learning about this artist was going to be more difficult than I first expected, and the seller did not appear to know anything about it. It was listed at $100 or best offer, and I figured I would roll the dice and offer $75. They accepted, and I received it four days later. I was correct that it was perfect for my kitchen, and matched the modern Nambe pieces we had just purchased as if it were designed for them.


The signature was quite stylized, and I immediately assumed that this was the work of a studio pottery. The quality was top-notch, high-fired with very thin walls and a smooth soft glaze. This was not the work of a rank amateur. Internet searches turned up very little. The only reference available was an auction in Georgia from 2006 where a very bizarre tea set was sold. Unfortunately It did not include an image of the signature.

Then, in 2007 another variation of the tea set sold on ebay. This one was reported to have originally been purchased from an unnamed art gallery in seattle. Unfortunately, there was no indication of when it might have been purchased.


This sale did include an image of the signature.


Recently on ebay a coffee set came up, and has not yet sold. It is comprised of 4 cups and a plate, and as usual the seller has no information about it's origin.


To date we have not been able to determine anything further about the artist. Each piece (or set) appears unique, but currently there is no way of knowing if that is the case.


It has been noted that these pieces seem to be reminiscent of the work of Eva Zeisel, and I must agree. They have a distinct modernist feel, quite at home in a mid-century modern style. If anyone can shed any light on the artist or origins of these pieces it would be greatly appreciated.