Most of the Roseville Pottery lines from around 1930 until they closed in 1953 came in three distinct color themes. They are often referred to by the main background color such as Red, Pink, Blue, etc. However, unknown to many collectors, around 1940 Roseville began giving proper names to the colors, and expressed them in advertisements. Below is a short list of 15 pottery lines and the color names as given by Roseville.


This list can be very useful when you have Roseville Pottery for sale. Having the ability to identify the correct color name makes you appear more knowledgeable about the pieces you wish to sell, and increases the chance of a sale. If you discover other given names, please let us know so that we can expand this list.

Posted by The Kings Fortune at 6:22 PM No comments:

In 1948, the Roseville Pottery Company introduced their Apple Blossom line. There were 45 shapes listed in the catalogs, in three color schemes: Coral, Aqua Blue, and Apple Green. It was produced for several years, and is considered a common later period line with moderate collector interest. They can easily be found in many antique malls, flea markets, and auctions, and the pieces generally do not command very high prices. This makes it a good entry-level pattern for collectors looking for Roseville pottery for sale.

When creating a new line, Roseville Pottery would first produce a range of variations in both shape and color scheme, usually only one of each variation, and then go through a process of determining which color scheme or design to use. These "one-off" pieces were never made available for sale, and most were destroyed. They were simply test pieces that at the time had no value. This article will examine once such item, a prototype vase from the Apple Blossom line, 385-8. 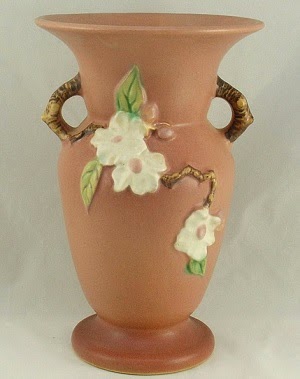 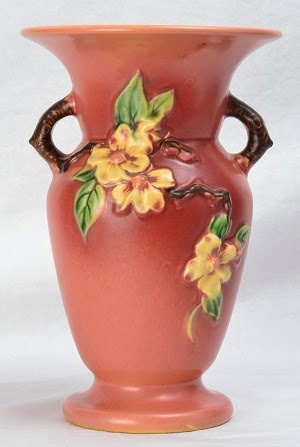 The picture on the left is an experimental prototype for the 385-8 shape, and the picture on the right shows the vase as produced in 1948. Note the brighter color of the background glaze, the richer details on the flowers, as well as the additional leaves and buds. Also, the flowers are yellow with pink details on the prototype, whereas the production vase displays simply white with coral centers. 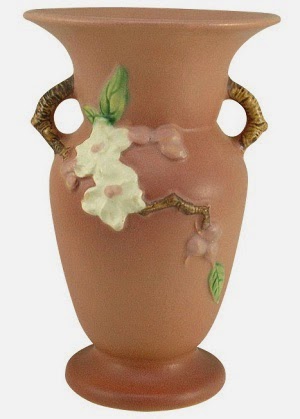 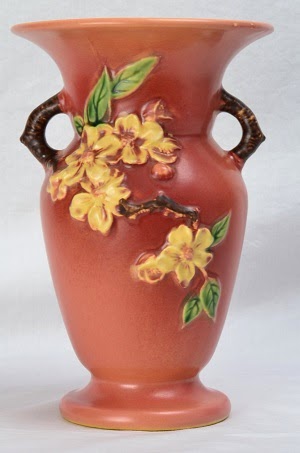 On the reverse, the differences are even more striking. Instead of just a simple pair of flowers, there is a large flourish of them, and an addition of several more leaves.We may never know the reason why the choice was made to reduce so many components of the design, but it was likely done to keep production costs lower. Regardless, the actual production piece looks clumsy by comparison. 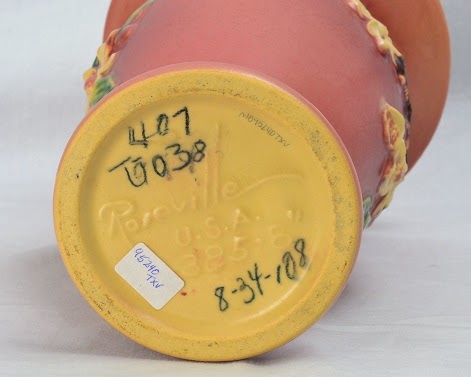 On the base we find the expected "Roseville USA" and the shape number 385-8, but also additional annotations written in crayon under the glaze. The 8-34-108 are probably the colors used on this piece, and the 407 6038 might be the trial designation. Also in very small pencil letters is a catalog number from a rather large collection, the Monsen-Baer collection. This piece is likely unique, and was last sold at a Humler  & Nolan auction on March 7, 2015. Any collector of the Roseville Apple Blossom pattern would be proud to display such a rare and important piece in their collection, but in the end, only one collector can.


Posted by The Kings Fortune at 6:50 PM No comments: